Zhongji Holding was listed on the Chinese Stock Market this past week, and subsequently bought 51% of Hongtou, the investor that acquired Jagex back in July of this year. Zhongji Holding will then purchase the remaining 49% of Hongtou during the next 12 months. Jagex was previously the UK’s largest independent developer and publisher of video games and has most famously been known for Runescape, a F2P MMORPG that has stood the test of time to date (it went live in 2001).

The NFL established its presence in China in 2007 and they are aiming to hold a season opener game there in 2018. The organization has stated that “its China fan base has seen a staggering 1187 percent increase from 1.6 million fans in 2010 to 19 million in 2015.” We have seen the growth of many global sports in China over the past half decade, especially soccer (football). The popularity of soccer (and racing, and basketball, etc) has helped boost sales and usage of digital games of those sports. If American football takes off in China, there are many PC, mobile and console football games that could catch on there too.

There are reports that while Samsung did not recall the exploding Galaxy Note 7 devices in China (stating that the suppliers’ component isn’t present in all distributed phones), there are still explosions taking place. According to Business Insider, the Chinese state broadcaster CCTV has weighed in on the exploding phone scandal, accusing Samsung of “discrimination” and acting in a way that is “full of arrogance.” In our most recent report on China’s mobile games market, we have included several assessments of the market share for different mobile devices in China. Contact us for more information.

This week marks one of China’s busiest travel times of the year – the Golden Week holiday in celebration of China’s anniversary. The People’s Republic of China is now 67 years old and throughout this week, it is estimated that 600 million people will travel abroad and domestically.

Overwatch is Twitch’s Most Popular Game in 2016

During Twitch’s second Twitchcon this month, the company announced Twitch Prime but also noted that according to their live-streaming service, Overwatch has been the most streamed game of 2016. Overwatch’s first big tournament already paid out $100k to a European team this year. The other top streamed games featured in the Twitchcon keynote include: 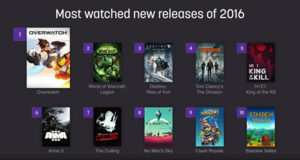 Twitch.tv is technically accessible in China but there are other competitors, like Duoyu.tv and Panda TV keen on owning this space. Overwatch has already become Korea’s top game, according to industry reports.

Follow us on Twitter @nikochina to see these comments in real time as we publish them! @ZhugeEx is Niko analyst Daniel Ahmad – his opinions are his own and he has a very informative blog and Twitter feed. Here are a few of our tweets from last week: