The Q3 2016 financial release stated that Tencent’s PC client-based games revenue had risen 10% year-on-year, but some industry observers doubted it, yet to Niko Partners, we thought it made sense because we had forecast the market to grow by 9% in 2016. In our quest to figure out what was going on with the “missing” $620 million, Niko analysts questioned whether PC online games revenue could simply be calculated by subtracting mobile games revenue from online games revenue as most analysts had been doing. We concluded that there had to be other revenue in other places of the financial statements because that simple calculation resulted in too low of a figure for PC online games compared to what we had forecast.

After closer analysis and confirmation with Tencent as detailed below, it turns out that we were correct: it is not accurate to do that simple calculation because some online games revenue (such as with Yingyongbao, Weixin and Mobile QQ) is categorized elsewhere in the financial statement as “social networks” revenue.

On 26 June 2017 Niko analysts discussed this matter via phone with the Tencent Hong Kong-based investor relations team, and the detailed discussion confirmed Niko’s estimate that Tencent’s PC games revenue is actually higher than the reports reflect and other analysts have believed, in line with what Niko Partners had forecast all along. We recognized that League of Legends (LOL) remains very popular, I-café usage is stable, and Niko’s gamer surveys show that mobile gaming is accretive to PC, not dilutive.

Tencent outlined where some of the revenue is categorized:

Niko’s 9% growth forecast for 2016 proved to be too high, but not because of Tencent. We were accurate about that “half” of the market. Rather, other PC games companies contracted significantly and the web games market collapsed, and we had not forecast those two things to be so detrimental to the market. Still, with Tencent growing 9% last year (which is in line with what our market forecast was), it seems that if that trend continues there is still hope for further growth in PC games revenue in 2017 and beyond.

In July 2017 China’s government called attention to the strong demand for Honor of Kings, especially by students who were on summer holidays. Tencent was the first games company to initiate a system solution for youth protection limiting playtime for children under age 18. This may impact MAU but not really revenue, because most paying gamers are over 18.

Tencent is fully committed to PC client-based games (and again, this is nearly 100% of their PC online games revenue as their web-games are practically non-existent). In 2017 beta tests have launched for Transformers Online, Rising Fire, Paragon, Paladins, MapleStory 2, and Orcs Must Die: Unchained. This shows how important PC client-based games are to Tencent’s business now and in the future.

Now we await the August release of Tencent’s Q2 results, but with a much clearer view on what they mean. 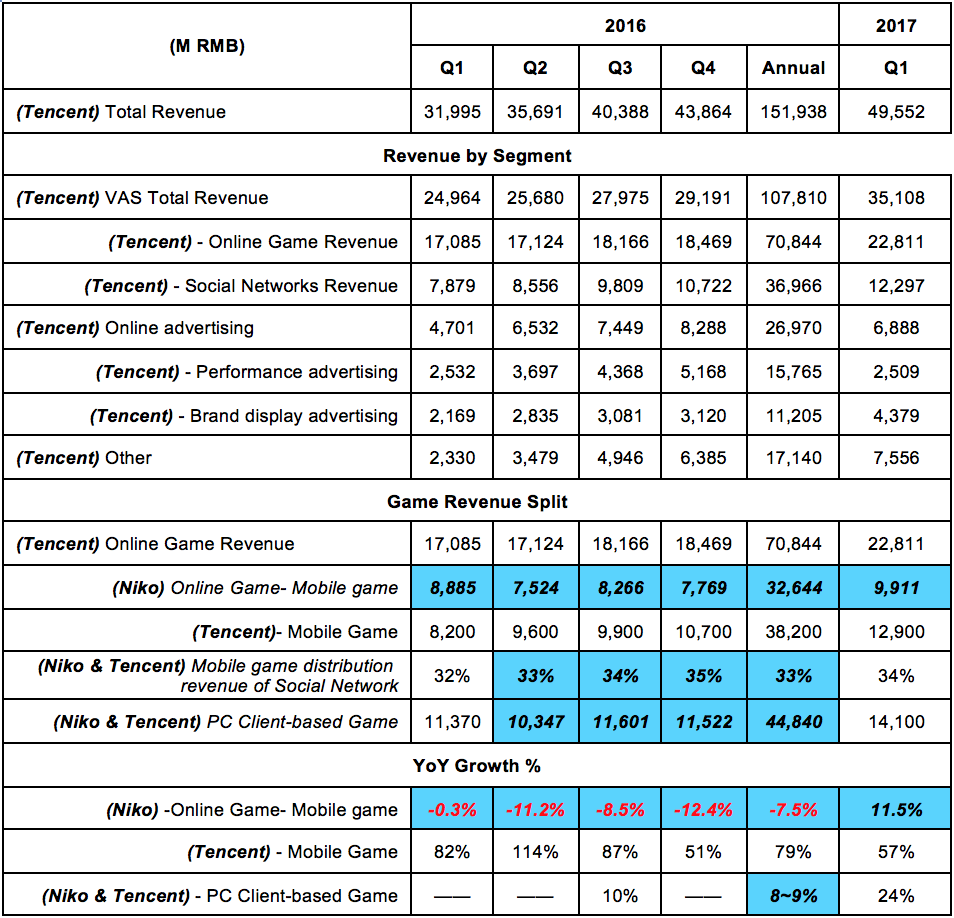 Note: Niko data is presented in blue, Tencent’s data is not highlighted.