How Chinese and American gamers differ

Since the beginning of 2018, Quantic Foundry and Niko Partners have been working together on a series of survey-based projects. Niko Partners is a market research and consulting firm covering the games markets in Asia.

In one of these projects, we used the Gamer Motivation Model as part of a larger study to create a player segmentation of Chinese gamers. This enabled us to compare U.S. and Chinese gamers and explore how gaming motivations vary across cultures.

The Quantic Foundry (QF) data comes (as usual) from the Gamer Motivation Profile, a 5-minute survey that provides gamers a personalized report of their gaming motivations, and see how they compare with others. Over 350,000worldwide have taken this survey. The survey is in English and thus respondents are predominantly from North America and the Western EU. The 12 motivationsthat are measured in our model were identified via statistical analysis of how gaming motivations cluster together. You can get a more detailed description of our gamer sample here.

The Niko Partners (NP) data comes from an online survey (in Simplified Chinese) of 2,000 representative digital gamers in China (from a survey panel provider), balanced across more than 40 cities in tiers 1 through 5. In that study, a gamer is someone who has played more than 60 minutes of games in the past 30 days.

Chinese gamers are more driven by Completion and Competition

The Gamer Motivation Profile is benchmarked against QF’s existing data set (based largely on gamers in the West). In the chart below, the 50th percentile line indicates the perfect average of each motivation in QF’s full data set. This is why the U.S. data (a large portion of QF’s data set) hews closely to the average. The error bars in the chart are based on 95 percent confidence intervals.

Above: Chinese gamer motivations versus American

The average Chinese gamer cares more about Competition than 75 percent of those in the U.S.

Similarly, Chinese gamers are also more interested in Completion — the appeal of collecting points/stars/trophies, completing quests/achievements/tasks. Conversely, Chinese gamers score below average across the Immersion and Creativity motivations (the last 4 motivations in the chart). They are less interested in being immersed in a compelling game world (Fantasy), interacting with an elaborate story and large cast of NPCs (Story), exploration and experimentation (Discovery), and customizing their avatar/town/spaceship (Design) relative to U.S. gamers.

The Competition finding may seem unintuitive because in the US cultural context, we tend to stereotype Asians as being compliant and striving for social harmony. But the data strongly suggests this stereotype doesn’t hold true among Chinese gamers, and the higher interest in Competition can help to partly explain the popularity of games like PUBG in China. After all, Battle Royale is probably the furthest away you can be from “social harmony.”

Gender differences are much smaller in China

Above: American gamer motivations, by gender

Among Chinese gamers, only three cross the threshold for statistical significance (at p < .01) — male gamers in China care more about Destruction, Discovery, and Competition. Of these, the differences in Competition and Discovery are substantively small (about five percentile points apart). Overall, the only robust difference is that female gamers in China are less interested in guns, explosions, and mayhem than male gamers. In contrast, nine of the motivations are at least 10 percentile points apart in the US data between male and female gamers.

Above: Chinese gamer motivations, by gender

In the U.S., there’s a lot of contention around the cause of observed gender proportions in different game titles and genres, specifically as to whether these differences reflect the historical marketing/cultural framing of games for boys or deeply rooted biological differences between men and women. The data from China suggests that even very large gender differences in gaming motivations can be almost entirely explained by cultural/marketing factors without using gender as an explanatory factor.

Age differences are also much smaller

In data we’ve previously shared using QF’s full data set, we’ve shown that the appeal of Competition declines dramatically with age, and it’s the motivation that changes the most with age. The appeal of Excitement also declines a lot with age in the US. The table below presents the correlation coefficients between age and each of the 12 motivations, broken down by country. 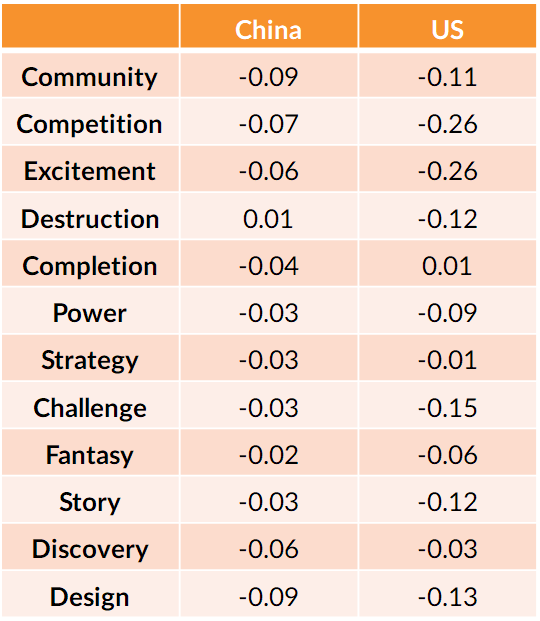 Above: Chinese and American gamer motivations, by age

So while the appeal of Competition and Excitement drop rapidly among U.S. gamers as they get older, these effects are much smaller among Chinese gamers.

When gaming motivations vary a great deal in terms of gender and age (as they do in the U.S.), it means game design and marketing have greater difficulty in being broadly appealing to different gamers, because they will often run into breakpoints in terms of gendered or age-based appeal.

On the other hand, the homogeneity of gaming motivations among Chinese gamers suggests a higher likelihood of cross-cutting appeal of game titles. Put another way, a game designer for the Chinese market likely has to worry less about satisfying orthogonal or opposing interests among different players because most Chinese gamers tend to care about the same things (high Completion and Competition, low Discovery).

The questions that remain

These findings raise a variety of interesting follow-up questions that our data cannot currently address. For example, the findings imply that the gender proportion of different game titles/genres in China ought to be far more stable than the large variation we see in games in the US. It’s also difficult for us to pinpoint the exact causes behind these observed differences (and lack of differences) in China. For example, the greater prevalence of more gender-neutral MMOs (relative to first-person shooters) may have shaped the adoption of gaming in China, leading to less gender differentiation relative to US gamers.

Nick Yee is the co-founder and analytics lead of Quantic Foundry. He combines social science and data science to understand gamer behavior in large-scale game data.

Peace through Intercultural Understanding: An Interview with Lisa Cosmas Hanson, Founder and President of Niko Partners

Elden Ring a hit in China

March 8th, 2022 | 0 Comments
Thanks to Baparekraf Game Prime 2021 for another successful event! Gallery

Thanks to Baparekraf Game Prime 2021 for another successful event!