Play like a girl: Key ways to engage one of Asia’s fastest growing gaming audiences

Today, the typical gamer in Asia looks a lot different than just five years ago. As widespread internet and affordable smartphones connect millions more people to the world of gaming, the number of genres have exploded, storylines have become more inclusive, and an even wider, more diverse audience is getting in on the action.

Asia’s booming gaming market presents a huge opportunity for marketers and developers to connect with millions of passionate, engaged users. But there’s one audience in particular that’s taken the gaming universe by storm — a space that’s largely been dominated by male gamers for decades.

Using our existing proprietary data and market models, we took a deep dive into Asia’s gaming market to explore the significant growth being driven by female gamers in key markets, which genres and platforms pique their interest, and what top development teams are doing to appeal to a more diverse user base.

Asia has long been a global leader in the gaming industry. By the end of 2019, the region accounted for nearly half (48%) of the world’s total gaming revenue.1

Whereas the gaming industry was once dominated by PC and console games, widespread mobile access has connected millions more gamers, giving people the ability to play more genres and titles anytime, anywhere. As a result, Asia’s gaming audience has grown larger and more diverse every year — and female gamers have been an especially prominent catalyst for growth in the industry.

As recently as three years ago, there were 346 million female gamers in Asia — less than one-third of the total gaming population.2 By the end of 2019, females accounted for 38% of all gamers across platforms at 500 million strong, and the numbers are continuing to rise.3

In fact, the number of female gamers in Asia is growing at a faster rate than male gamers. Asia’s user base of female gamers grew at 18.8% in 2019 and is forecasted to grow by 14.8% in 2020 — significantly outpacing the single-digit growth of total gamers, projected to be 7.8% in 2020.4

Gaming fandom among females is taking hold in all of Asia’s key markets. By the end of 2019, 45% of all gamers in China were female.5 And while Southeast Asia as a whole has a lower average percentage of female gamers than China, Indonesia is a notable standout — nearly half (49%) of the country’s mobile gamers are female.6

Female smartphone users in India also hold huge potential to spark growth in Asia’s gaming market. Right now, the country has the lowest overall percentage of female gamers in Asia at 18%.7 On the other hand, between 2017 and 2019, the number of Indian females who opened up to accessing the internet from their smartphones more than doubled from 19% to 42%.8 That means developers will have countless opportunities in the near future to connect with an entirely new audience of female gamers.

“PokerDangal,” a popular casual poker game in India, reported that its number of female users surged by 500% in 2019 — and more than 80% of those users were younger than 25 years old.9 This is right in line with the fact that 95% of Indian females who own smartphones use them to play mobile games, compared with just 86% of male users,10 and 78% of females played games for up to two hours on their smartphones.11 It’s clear that more and more Indian females — especially younger generations — are poised to become avid gamers in the near future.

The unique habits and preferences of female gamers

Gaming sessions and spending habits
Female gamers are unique in how long they stay wired into their favorite games. In our 2019 survey, we found that 60% of female gamers spend up to seven hours per week playing, whereas more than half of all male gamers play for more than eight hours a week.13 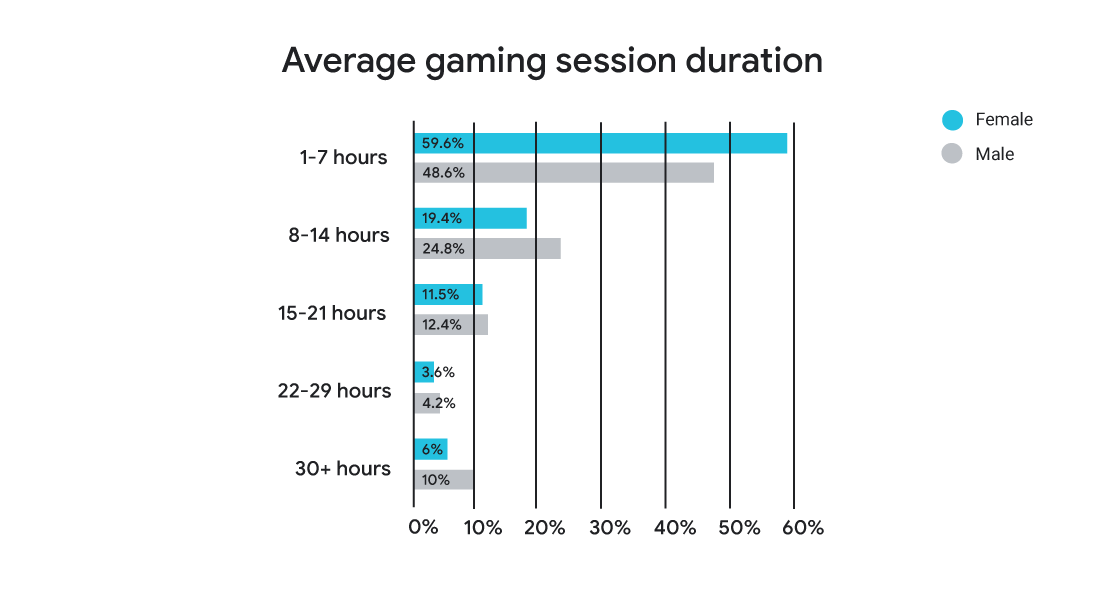 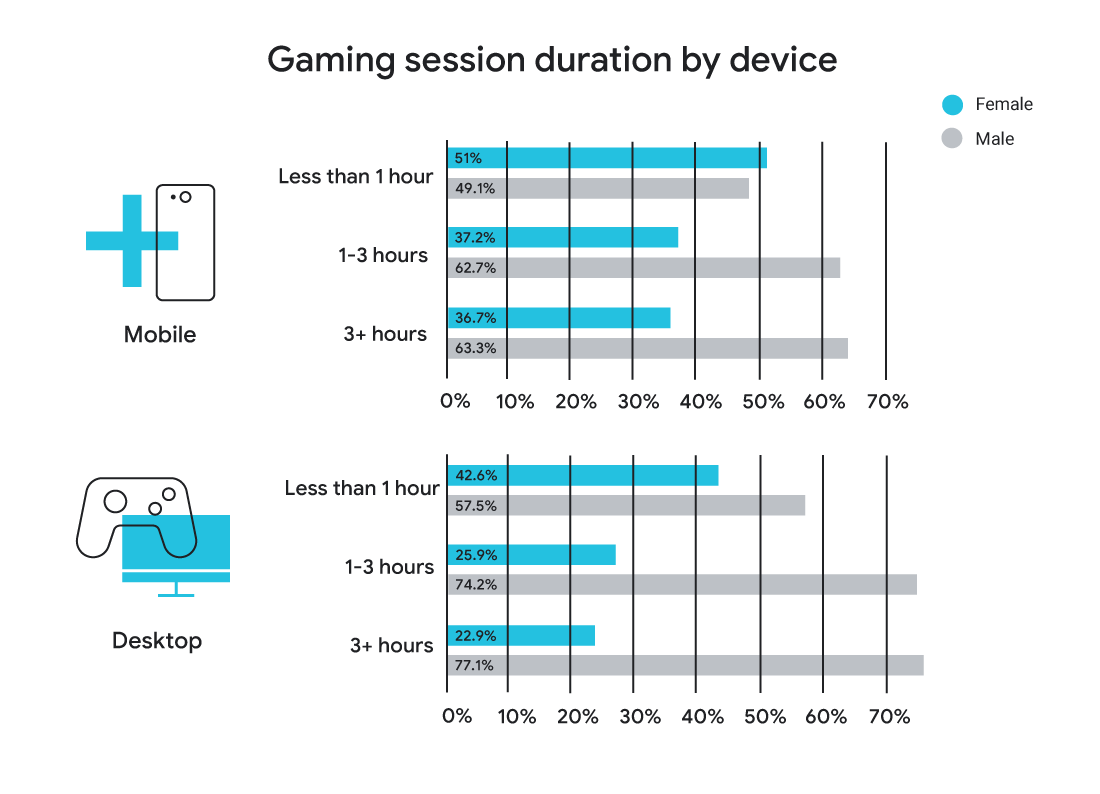 As shown above, we can see that most female gamers are spending more time on mobile. This ultimately translates to higher spends on mobile gaming, which is projected to account for 56% of Asia’s total gaming revenue in 2020 — 39% of which will come from female gamers, up from 35% in 2019.14

Considering how critical mobile games are to the industry’s growth as a whole, let’s take a closer look at what mobile genres, elements, and experiences are most captivating to female gamers.

Appealing to female mobile gamers
Among the plethora of mobile titles and genres, female gamers tend to prefer multiplayer online battle arena (MOBA), puzzle, and shooter games.17 Moreover, according to a study by Quantic Foundry, the user base for Match-3 category games (e.g., tile-matching and stacking games like “Candy Crush Saga” and “Jewel Quest”) and Family/Farm sim games is predominantly female.18

Role-playing games (RPGs) and simulation titles with strategic gameplay are also hugely popular among female gamers. As one example, in 2018, Chinese developer Xishanju’s CEO Guo Weiwei reported that female gamers made up nearly 50% of Jianxiaqingyuan’s (JX3) user base,19 despite females typically only accounting for 20% of massively multiplayer online role playing games (MMORPGs) in Asia.20 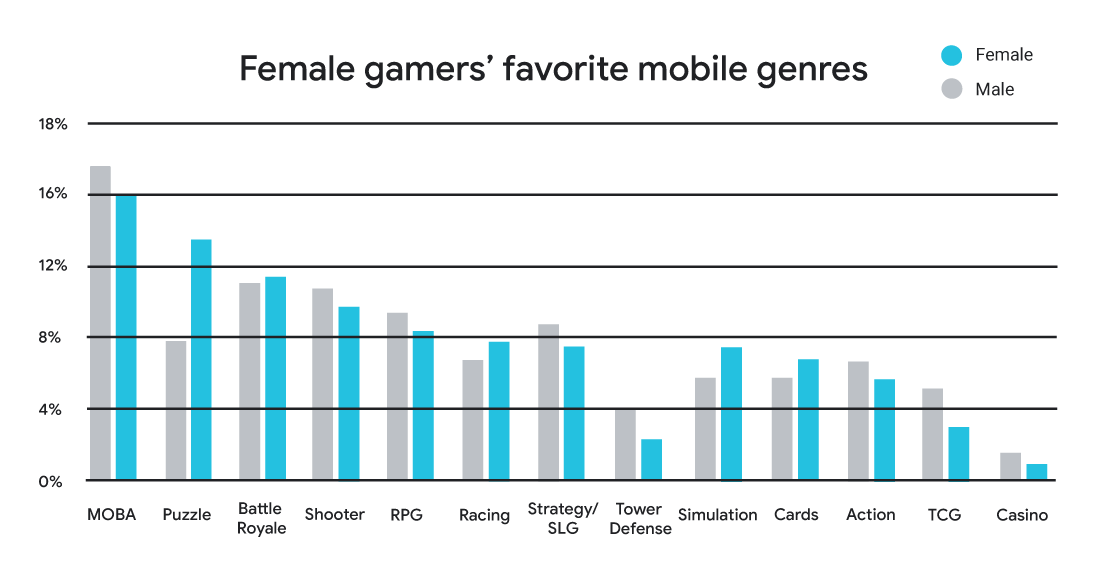 It’s worth noting that unlike other MMORPGs that primarily use Japanese-style aesthetics or Western-style realism, JX3 uses a colorful and palatial visual style that evokes the Tang Dynasty’s classical paintings, including people in beautiful traditional Chinese outfits flying around and battling in Wuxia martial arts style. The game also features unique functions not widely used in other MMORPGs, such as the character’s ability to fly whenever the player wants and even “fall in love.” 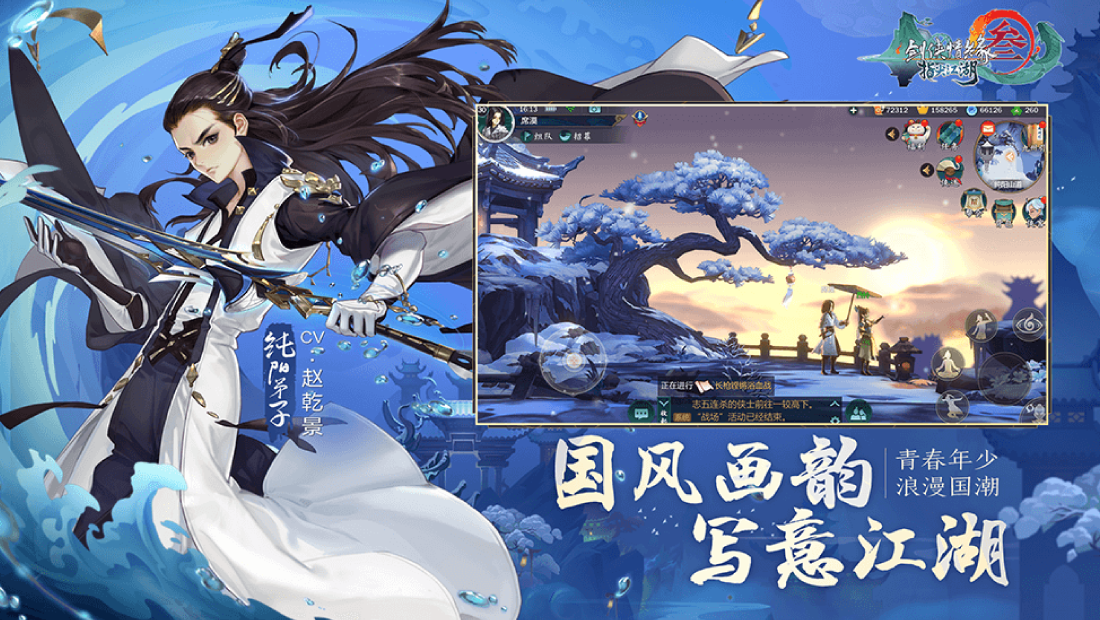 Asia’s female gamers are also flocking to RPGs with anime elements. One of the most well-known examples is “Onmyoji” from Netease, a hugely popular game based on Japanese mythology with visually striking anime art, turn-based elements, and item collection features. The game’s publisher Kakao stated that in Korea, nearly 50% of the game’s players are female.21 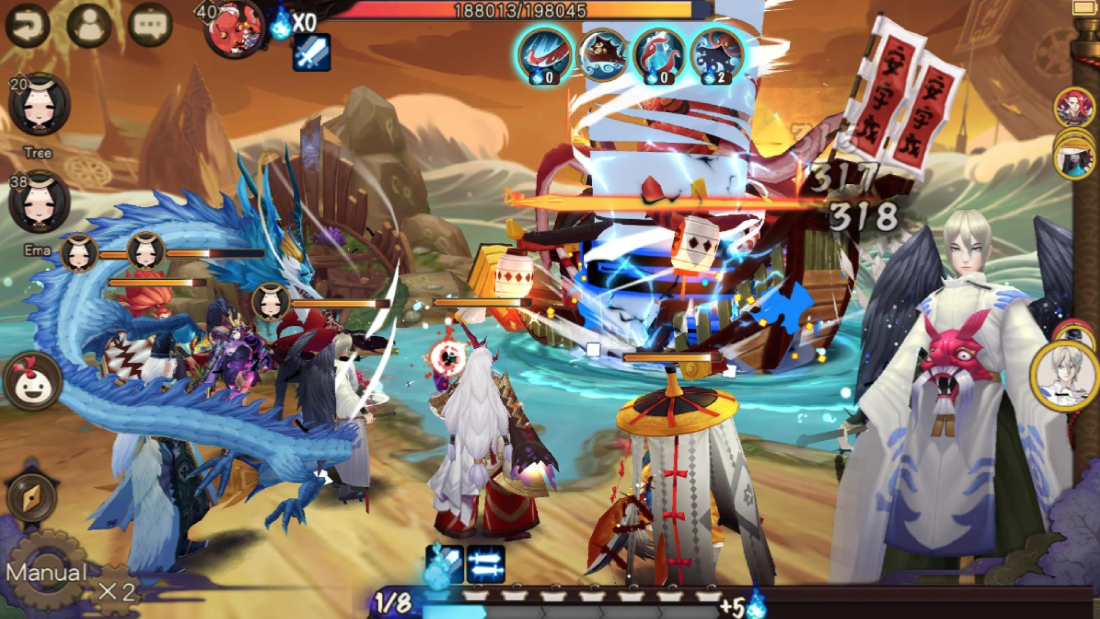 Along with their favorite genres, female gamers also gravitate toward games where they can customize or play as female characters. China’s Paper Games — the primarily female development team behind hit titles “Miracle Nikki” and “Love and Producer” — got an early start on this trend. Not only are 70% of Paper Games’ developers female,23 but so are 94% of “Love and Producer” users,23 and the huge success of “Miracle Nikki” with female gamers eventually helped the team land a TV show contract.

Games such as “Dragon Raja,” a futuristic MMORPG, and “Identity V,” an asymmetrical horror battle arena game, are also notable examples of popular titles that attracted a wide audience of both male and female gamers while avoiding oversexualized depictions of female characters that are common in many MMORPGs.

The rise of female gamers in esports

Until recently, esports has primarily been a PC phenomenon. The explosive popularity of gaming across platforms has sparked a surge in esports tournaments, fans, livestream events, and sponsored teams. And female gamers are quickly joining the fandom.

In a survey released by the Game Publications Committee and Gamma Data Corp, there were 290 million female esports players in China by the end of 2018 — an 11.5% year-on-year growth.24 And in China and Korea alone, females make up one-third of the esports audience, compared to the global average of 22%.25

Female gamers aren’t just tuning in to more esports events — entire teams and leagues of female gamers are making waves on the world stage. In Southeast Asia, the independent Female Esports League has been gaining popularity since 2012, with players competing in tournaments across titles such as “League of Legends,” “DOTA2,” and “Mobile Legends.” Singapore’s Callisto Gaming, founded in 2019, is a new esports organization exclusively focused on female gamers, and teams like Bren Female, Belletron, and Asterisk have earned huge followings and top prizes in the past few years.

How COVID-19 has impacted game time in Asia

Social distancing and stay-at-home mandates around the world have driven a surge in at-home gaming among both males and females. In April 2020, Niko Partners conducted a survey in China — the biggest gaming market in Asia — to observe the impact of COVID-19 on gaming behavior. In the survey, 94.9% of females said they spent more hours gaming during the pandemic compared to before the outbreak.26

As they spend more time playing at home, an average of 70.3% of female gamers we surveyed also reported spending more money on gaming compared to pre-outbreak.27

The impact of COVID-19 on esports
As a result of the COVID-19 outbreak, offline esports events were cancelled to protect the health and safety of players and fans, and the industry quickly shifted to a 100% online format that’s both safer and cheaper to run. Esports operators in Asia took the opportunity to create a number of tournaments focused on female players to drive additional engagement during the lockdown. For example, Garena Indonesia held its first female-only Call of Duty Mobile Princess Cup that included 36 teams. Singapore’s Female Esports League and Vietnam’s PUBG Female Championship also held special online matches to bring female gamers together during the pandemic.

It’s clear that female gamers are a crucial piece of the foundation of Asia’s fast-growing gaming market. In the next few years, their influence on gaming trends and impact on total revenue will be definitive, to say the least. And, considering how much more female gamers are playing and spending on games during the COVID-19 pandemic, we could potentially see even higher levels of engagement once the world starts returning to a new normal.

Based on what we learned about female gamers and the development teams outpacing the competition, successfully tapping into this opportunity comes down to four steps:

As female gamers have more influence on global trends, it’s time that more developers start rethinking their strategies and considering new ways to appeal to a diverse user base — whether by tweaking art styles and design, adding new characters and customization features, sponsoring esports tournaments, or creating entirely new games to attract a wider audience.

Niko Partners combines data from game developers and publishers, publicly available data from other sources such as retailers and Chinese app markets, and our own assumptions and qualitative gamer survey results to calculate market estimates and generate lists of leading games. We also regularly interview executives at games and hardware companies as well as government officials. We leverage our own proprietary primary data combined with direct access to a panel of more than four million consumers in China, and millions more throughout Asia, to create deep qualitative and quantitative analysis, market models, and five-year forecasts. Our analysts regularly conduct gamer surveys, interviews, and focus groups throughout China as well as Indonesia, Malaysia, the Philippines, Singapore, Thailand, Vietnam, Chinese Taipei, Japan, South Korea, and India.