For 19 years, we’ve offered insights on the videogame industry in Asia to our clients 11 markets, including China, Chinese Taipei, India, Indonesia, Japan, Malaysia, Philippines, Singapore, South Korea, Thailand, and Vietnam. Our global team of analysts deliver the insights, data and analysis within products and services to clients who rely on us for high integrity information to understand the Asia games market and drive business decisions.

Here are some of the important data and trends we shared with our clients in 2020:

BACKGROUND: Genshin Impact, a new open world RPG from Chinese developer MiHoYo, has been a key title this year. The game has performed very well in its home market of China, and had over 15 million pre-launch registrations. MiHoYo built on its experience operating hardcore mobile titles such as Honkai Impact 3 to create a deep yet accessible RPG game that scaled across multiple platforms.

INSIGHT: When analyzing Niko’s China Games Streaming Tracker, we found that the title has remained a top ten title since launch and is most popular on Bilibili with 棉花大哥哥 being one of the most popular streamers. We also found that the game had its best day on December 1st when a new character called ZhongLi was added to the game. Almost 4,000 streamers broadcast the game on December 1st with 9.5 million cumulative viewers tuning in to watch. Viewers of the game have continued to peak when new updates are introduced and during character wish banner events.

INSIGHT 1: Tencent closed a record number of 31 videogame related deals in the year. When analyzing our China Games Market Database, we found that this was three times the number of deals it closed in 2019 and more than four times higher compared to 2017. Tencent’s approach to M&A can be traditionally characterized as somewhat conservative, investing primarily in firms that have a proven hit or established product or service. This year the company has been more proactive with its investments in the gaming space.

INSIGHT 2: The company has augmented its investment philosophy this year, now investing in smaller companies than it typically does, and at a much earlier stage. Tencent is also investing in companies with experience in PC and Console games, while offering its experience in mobile games to them. The change comes after Tencent has faced increasing competition in the games space from large tech firms such as Bytedance and Alibaba, as well as medium sized companies such as Lilith and MiHoYo that have succeeded in spaces where Tencent has seldom invested in. Tencent is in no danger of losing its #1 position in the games market, but it is beginning to feel some pressure as other companies have been able to disrupt its grip on the top ten grossing games chart.

BACKGROUND: India’s Ministry of Electronics and Information Technology (MEIT) banned 220 mobile apps from or related to China this year following rising tensions between the two countries. The MEIT cited national security issues as the main reason behind the ban.

INSIGHT: Our Asia 10 Value Added News Analysis has logged each batch of banned games, listing 59 apps in June, 118 in September and 43 in November. We found that 46 of the apps banned were mobile games including key titles such as PUBG Mobile and Mobile Legends.  Two of the highest grossing genres in India are Battle Royale and MOBA, and Chinese operators have several of the most popular titles in each. PUBG Mobile was the #1 game in India in 2019 and early 2020, and was a driver for growth with 200 million downloads (70% were PUBG Mobile Lite). The follow-on impact on esports and influencers is also devastating to India’s rising stars. The ban of Mobile Legends (Moonton) has also left a vacuum in the MOBA category that will be hard to fill.

ABOUT THE TOOL: Niko’s Value-Added News Analysis is a curated news service that we send directly to clients on an ongoing basis. We provide critical news information, customized to strategic areas of interest, along with our analysis on why it’s important. We offer this product for both Mainland China and the Asia 10 market which includes: Chinese Taipei, India, Indonesia, Japan, South Korea, Malaysia, Philippines, Singapore, Thailand, and Vietnam. 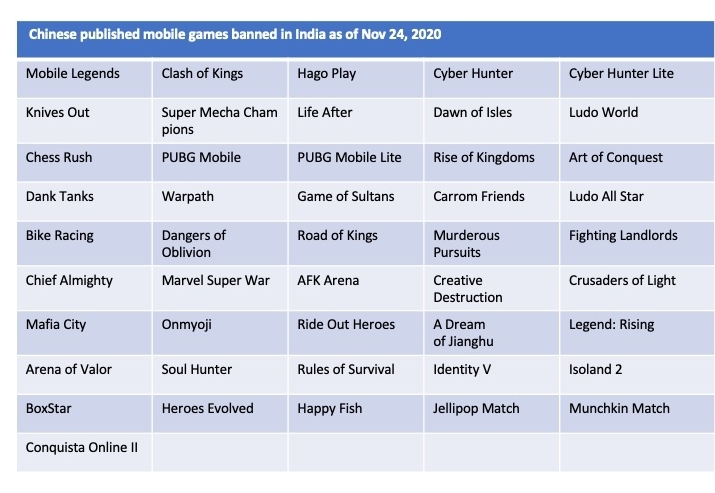 4. Mobile esports on the rise in Southeast Asia

BACKGROUND: Over the last 5 years Niko has closely monitored esports’ explosion across Asia, and since 2018 we have tracked all of the major esports competitions in each of the Southeast Asian countries we cover, recording tournament data as means to understand leading trends across the region. In 2020 we made this database available through our Asia Esports Tracker, a detailed view of esports in Aisa by the numbers.

INSIGHT: 2020 marked a transformative year for the Asian esports industry, with viewership increasing dramatically, even as many major tournaments were canceled, postponed, or moved online only. Niko tracked an overall increase in the number of mobile tournaments taking place in SEA, the number of which which rose by 21%, while the number of PC competitions fell by 16.8%. Esports prizes on offer also fell significantly in 2020, as sponsors looked more cautiously at online-only competition, mobile prizes fell by 30%, correcting down from exponential growth between 2018 and 2019, and PC prizes fell by 23.5%. At a country level, Singapore, Malaysia, and Chinese Taipei, regional hubs for major esports events, hosted far fewer competitions in 2020 as most regional and global tournaments were either on hold or took place online. The battle royal and MOBA genres continued to push the industry forward, with Mobile Legends: Bang Bang and PUBG and PUBG Mobile serving as the leading esports titles in the region.

The graph below uses 3 years of Niko’s esports tracker data to illustrate the number of tournaments taking place in 6 SEA countries between 2018 and 2020. Indonesia and Malyasia lead the region as esports tournament hubs thanks to well developed games industries, infrastructure, and a combination of groundswell and government support. In 2020 Niko Partners added preliminary country coverage for India, Japanese, and Korean esports to the tracker as well.

ABOUT THE TOOL: Niko’s Asia Esports Tracker is the premier source of information on all things esports in the region. Over the last 3 years Niko has closely monitored esports’ explosion across Asia, tracked all of the major esports competitions in each of the Asian countries we cover, and recorded tournament data as means to understand leading trends across the region. In 2020, we made this database available through our Asia Esports Tracker, a detailed view of esports in Asia by the numbers. 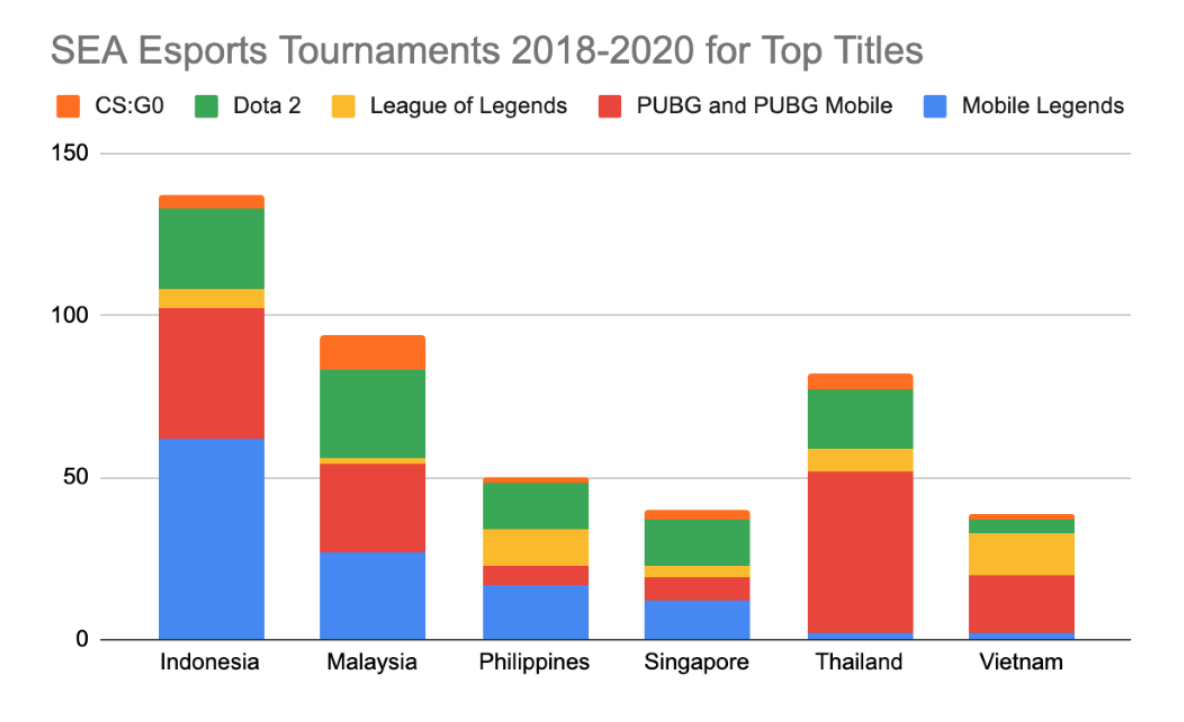