Indian foreign direct investment policies (FDI) have changed since Prime Minister Narendra Modi was elected to his second term of office in May 2019, having initially been elected as PM in 2014. Under Mr. Modi, India had liberalized the country’s FDI policies to allow bordering countries (except Pakistan and Bangladesh) to generally have automated access for FDI and had become a desirable recipient of FDI, particularly from its neighbor China. However, there was a dramatic, noteworthy shift in this policy in April 2020 where what had been a fairly automated process before for countries bordering India now requires the federal government’s approval. On April 18, The Department for Promotion of Industry and Internal Trade (DPIIT) issued a press release stating that the policy shift aims to curb all opportunistic takeovers by Chinese corporations due to the COVID-19 pandemic. The announcement came one week after China’s central bank acquired a 1.01% stake in India’s biggest housing mortgage lender, HDFC. China has voiced outrage, saying that India is in violation of the WTO principles.

What are the new regulations and who will be affected?
According to the new FDI policy, an entity of a country which shares a land border with India or where the beneficial owner of investment into India is situated in any such country can invest only after receiving government approval. The countries added to the jurisdiction are China, Myanmar, Bhutan, and Nepal, while Pakistan and Bangladesh already fell under the provision for needing federal approval. The new policy also puts transfer of ownership of an existing or future FDI in an entity in India, directly or indirectly, under the approval route for the nations under the new provision.

Response by China
Within a couple of days of the announcement of the new FDI regulations, China called India’s new policy ‘discriminatory’, and alleged them of being against the free trade rules of WTO. The outburst can be seen as a result of China’s fear of losing on a huge market which promises great returns. In a span of 6 years, China has pumped in an estimated $26 billion on Indian startups, infrastructure pharmaceutical sector, technology sectors, and more. A prominent sector of Chinese FDI is video gaming, which has significantly fueled the growth of the Indian gaming industry.

Chinese interests in Indian startups are at risk
18 of the 30 unicorn startups in India are Chinese-funded. This makes their success highly dependent on Chinese corporations. Additional investments from existing Chinese investors will face further scrutiny before Indian government decision, hence putting the stakeholders as well as the businesses at risk.

Removal of the automatic route causes a waiting period prior to decision, which therefore will lengthen the time to close deals. The follow on impact could be that Indian businesses are forced to look beyond China to meet their funding requirements.

It also puts into question the transfer of ownership of a gaming entity in India to a Chinese corporation’s subsidy located outside of China. This is still a concern which remains unclear, however it is plausible that Chinese companies would be deprived of buying stakes in Indian gaming firms even via overseas business units.

Tencent, Alibaba, and Indian companies
Chinese multinational conglomerate Tencent is the biggest financial backer of India’s first billion dollar gaming company, Dream11, having led a $100 million funding round in 2018. Dream11 holds a whopping 90% of the market share in the fantasy sports genre and has 50 million users, which is only projected to grow this year. But, the new FDI policy puts both Tencent and Dream11 in a tricky position. Any further investments by Tencent in the company would be under scrutiny by the government hence potentially provide opportunity to the other stakeholders, such as Kaalari Capital, Think Investments, and Multiples Alternate Asset Management, to acquire more equity and thereby replace Tencent as the majority share holder. On the other hand, India’s most valued startup, Paytm, an e-wallet platform worth $16 billion, lists China’s Alibaba Group as the majority shareholder. Paytm is one of the most commonly used payment platforms for online gaming in India, because it ensures transparency in transactions. Alibaba entered the Indian gaming market through Paytm First Games, a gaming joint venture between Paytm and Alibaba. This relationship may become problematic if it is enabling FDI without government approval. Alibaba may endure competition for greater investment by other shareholders, such as Softbank, One97 Communications Ltd, and Berkshire Hathaway. Further information on which Indian companies are supported by Tencent and Alibaba can be seen in the following table. 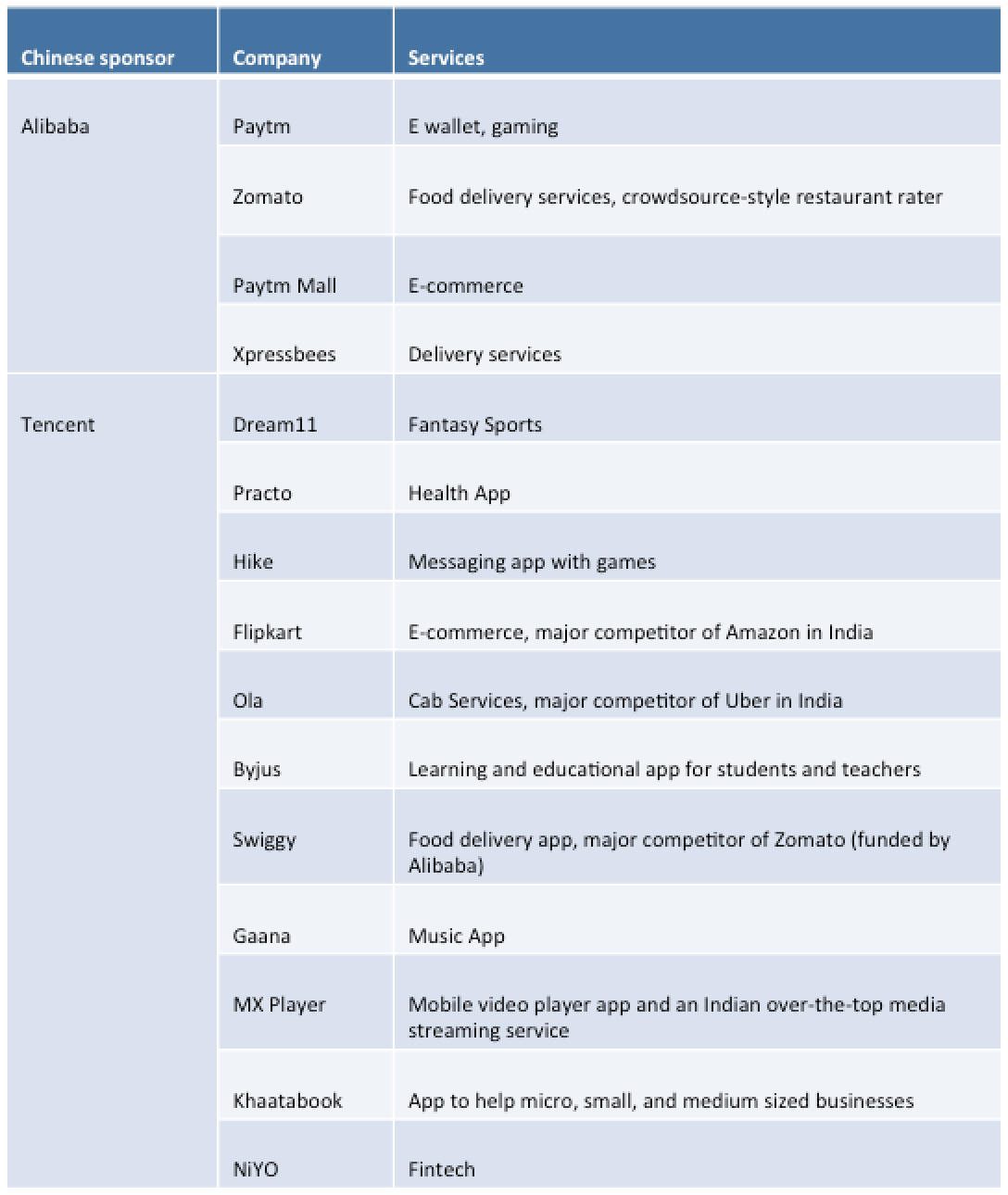 Huawei and 5G
The new provision could even impact the roll out of 5G in India. Despite a diplomatic tussle between the US and China and warnings from the US against such action, India gave permission to Huawei, in December, to participate in 5G trials. With the new FDI policy, it is questionable whether the Chinese tech giant will be still allowed to carry out the promised business.

Facebook and RelianceJio
Interestingly, a few days after the Indian Government announced the new FDI policy barring China from any automatic investments in the country, Facebook bought a 9.99% stake in Jio Platforms Ltd, for $5.8 billion. Jio clearly has intentions to build and take part in the Indian gaming market as its founder, Mukesh Ambani, in a recent interview with Microsoft CEO, Satya Nadella, stated that gaming in India could be bigger than film, television, and music put together. Jio catapulted the mobile gaming industry in India in 2016 by giving away 4G for free to all users. Facebook’s investment focuses on e-commerce and e-payment services for now, but gaming may become a goal in the future. While the Facebook-Jio deal might have been a result of months of negotiations, the timing of the deal is still mesmerizing.

How China has impacted the Indian gaming market
Rougly 85% of Indian gamers play on mobile smartphones, in part thanks to Jio. Chinese smartphones like Xiaomi, Realme, Oppo, and Vivo dominate the Indian mobile market with a combined share of 68%, as reported in the last quarter of 2019, leaving Samsung and Apple way behind at 19% and a mere 3% respectively. Cheap and widespread availability of data, coupled with abundant choices of low cost smartphones, support growth in mobile app usage.

Tencent brought PUBG to the Indian market which in turn helped the country transition from casual gaming to competitive and esports gaming. Post launch of PUBG, mobile game downloads have increased by 8 to 10 times taking the Indian gaming population to over 200 million from 120 million in 2016. Not only has PUBG impacted the popularity of esports, but related sectors as well. The new wave of gaming has pushed students to enroll for game development and aligned courses at colleges. Last year, LPU in Punjab witnessed a 10% hike in applications for courses related to gaming. Gamers have also taken to Youtube for live streaming, hence opening up a new source of income for the whole community.

Conclusion
The new FDI policy comes during the lockdown of the COVID-19 pandemic, which has led to the worst slump in Indian GDP since 1991. The driver may have been to prevent powerful China from taking advantage of a weak economy during the crisis, but the outcome may be that Indian gaming startups have fewer options for fundraising. India is a hot growth market for the video games industry, and will be important to follow as the investment at this stage is likely to set the course for the industry over time. This dramatic shift in FDI policy may be the opening into India’s promising market that other companies from major foreign economies need to get their foot in the door to compete against China. The Facebook-Jio deal may have very coincidental timing to the restriction of Chinese FDI, but was likely planned for many months before.