Gaming in China: Lunar New Year and the Coronavirus Outbreak

Gaming in China: Lunar New Year and the Coronavirus Outbreak

The Lunar New Year holiday is when we see the highest demand for gaming in China annually. In the Year of the Rat we observe total spending, time spent in games and active users increased significantly across top games for the holiday week ending January 30th, compared to the first week of the holiday in 2019. Lunar New Year is the most important holiday in China, and this year the planned official holiday dates were January 24-30. The terrible outbreak of the novel coronavirus in Wuhan and subsequent contagion have forced authorities to extend the holiday by 2 weeks in many places. Chinese authorities have confirmed more than 20,000 cases of the new novel coronavirus, a deadly pneumonia like disease which has already claimed over 400 lives and is spreading throughout China and the world.

The government has mobilised quickly to try and contain the virus by quarantining patients, locking down cities, imposing a travel ban and extending the Lunar New Year holiday. These actions are being taken to reduce human to human contact which is believed to be one way that the coronavirus is spreading. We share deep concern for the people of China who are impacted by the coronavirus. We particularly watch Wuhan and all of Hubei Province and send positive energy to all people there. Retail, entertainment, tourism and even gaming sectors have been impacted as restaurants, cinemas, shops, internet cafes, esports tournaments and other venues have been temporarily closed.

We are currently evaluating the impact of the novel coronavirus on China’s digital games market and will adjust our 2020 forecast in our April reports. Meanwhile, our current observations are found in this document.

Mobile gaming usage and spending in week 1 of the holiday period were up compared to same period 2019.  According to data from Sensor Tower, total games downloads on the iOS app store were up 27.5% YoY and revenue was up 12.1% YoY. The addition of Lunar New Year events and content in games contributed to the increased spending, yet we attribute most of the increase to the impact of the novel coronavirus which led to more gamers staying at home instead of traveling or socializing outside of the home, allowing more time to play games. We expect to see similar increases in spending and downloads over the next couple of weeks due to the extended holiday period and travel bans in certain cities. 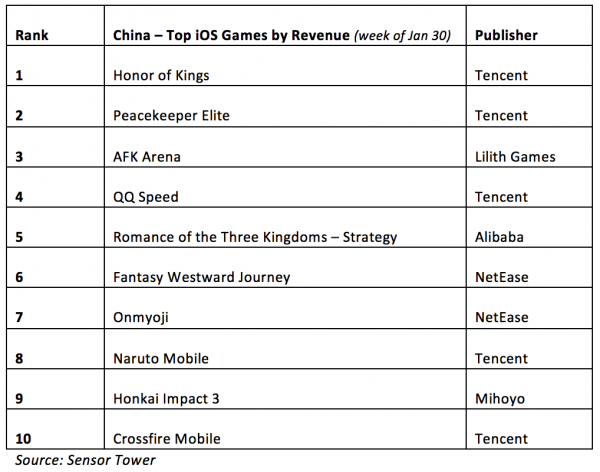 Tencent’s Honor of Kings, its 5v5 MOBA game, maintained its position at the top of the iOS game revenue chart during the Lunar New Week, as it has in previous years, even hitting an all time peak DAU. Peacekeeper Elite charted at #2, also achieving a new record for daily users. Honor of Kings added new skins and gift packages and Peacekeeper Elite added a virtual concert to celebrate the new year, with singers such as Jam Hsiao, Wilber Pan, GEM and Tia Ray. The overwhelming popularity of both games even led to a server crash in Peacekeeper Elite. Whilst Tencent was able to bring the game back online relatively quickly, the company still offered a set of skins for free as compensation.

NetEase games also performed well during the Lunar New Year holiday period with two games in the top 10. Fantasy Westward Journey charted at #6 whilst Onmyoji jumped from #19 in the prior week to #7 during the holiday week. Lilith Games’ new launch of AFK Arena on January 4 also did well in the holiday. The turn-based casual RPG with action and card elements has been a hit among gamers who have praised it for innovating on traditional idle RPG mechanics whilst maintaining simplicity. Alibaba Games had one game in the top 10 with Romance of the Three Kingdoms – Strategy, a self-developed title based on the license of the same name from Koei Tecmo.  The strategy game is based on the Three Kingdoms period with the goal to conquer all of China.

We expect the novel coronavirus to have a notable negative impact on internet cafe gaming in China, primarily due to the temporary closure of all locations during the extended quarantine. The holiday usually ends after one week, which in 2020 was scheduled to end on January 30, but has currently been extended through to February 2, with Shanghai, Jiangsu and other provinces further extending the holiday through February 9 and Hubei province scheduled to end the holiday (aka “quarantine”) on February 13. It is currently unclear if internet cafés will resume usual business after these dates and given that the virus has yet to be contained, we expect internet café usage to decline significantly year over year.

We expect the decrease in internet cafe usage to be partially offset by in home PC gaming which surged during the Lunar New Year holiday week due to platforms such as Steam and WeGame, both of which ran New Year promotions. Steam had more than 2,000 games discounted in the promotion including popular AAA games. One game that stood out as a best seller on Steam and the #1 paid game on iOS was Plague Inc, an 8-year-old strategy game where players can wipe out humanity with a deadly virus. The popularity of the game is directly linked to the coronavirus outbreak as many Chinese players downloaded the game to simulate what could happen in the real world. We note that the game reached an all-time high for peak concurrent players on Steam and reached #1 on the iOS paid game chart in China for the first time since November 2014, with the developer making a public statement to not use the game to track the actual virus.

Steam hit an all time high PCU of 18.8 million (globally) on February 2, the final day before the intended end of the holiday period across most of the country. The higher usage in China is probably responsible for the PCU level. On January 26th, the day after the actual Lunar New Year celebration, Steam had 18.4 million PCU, which was the highest of the month. The previous record for Steam PCU was in January 2018, primarily driven by PUBG. The extension of the holiday period has certainly helped engagement and spend across in home PC gaming, but the impact from a decline in internet café usage will impact overall PC game revenue this month (particularly for non-Steam games) and possibly for the full year.

Multiple esports events have been cancelled or postponed due to the novel coronavirus. The second week of the League of Legends Pro League was postponed along with the WESG Asia-Pacific finals which were scheduled for February. There has been no update on when these events will be rescheduled. Neither tournament takes place in Wuhan or Hubei province, yet the decision was made due to travel bans that have been implemented across the country which would have impacted the ability for spectators to attend, as well as to protect the health of players and fans.

Global gaming firms have also been impacted with Activision Blizzard cancelling planned Overwatch League esports matches during February and March. Two Chinese teams in the Overwatch League, Guangzhou Charge and Shanghai Dragons, have already confirmed that they are relocating to South Korea in order to protect the health of players and staff.  The coronavirus has also had an impact on tournaments outside of China with the League of Legends Champions Korea league impacted. Whilst matches will still take place on February 5th as planned, there will be no live audience for the game at the LoL Park in Seoul, South Korea.

Other esports events have also been affected with the League of Legends Pacific Champions Series also being postponed. The novel coronavirus is having a significant impact in offline competitive gaming events and we expect disruption to continue for a number of months in mainland China as teams and leagues are forced to relocate and play elsewhere later this year.

Console gaming time and viewing time on online game streaming platforms is up during the Lunar New Year holiday week, driven by increased free time and time spent at home. Console gaming has seen a similar increase to both PC and mobile gaming, but we note that there are negative impacts to be aware of in this space too. We expect video game console hardware sales to decline due the holiday period as gamers prioritise money towards medical supplies and game platforms they already own such as smartphone gaming or in home PC gaming, plus the closure of retail stores. The lack of new game approvals and releases for the Nintendo Switch during January will also impact Switch hardware sales.

Game streaming platforms have mostly seen a positive impact as the novel coronavirus has kept people indoors and on smartphones and PC’s to consume gaming content. The Douyu streaming index shows that games such as Honor of Kings, PUBG and League of Legends are twice as popular than during the Lunar New Year holiday week last year, with Peacekeeper Elite being 3x more popular than what was then PUBG Mobile last year. Console games were also 3x more popular in 2020. That being said, we do note that Douyu’s stock price was negatively impacted last week as it reported that it may have trouble with staff returning to work due to its head office being in Wuhan itself, the centre of the outbreak. Douyu would also lose revenue from its inability to broadcast esports tournaments, which have now been cancelled. 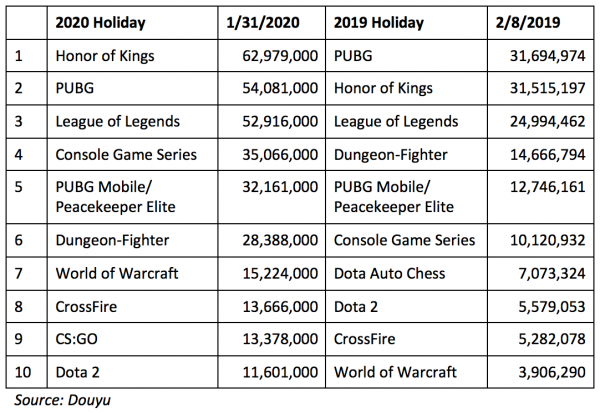 The extension of the Lunar New Year Holiday is expected to impact the number of games that will be approved in February as local regulators may not begin to resume the licensing process until after the middle of the month. There were 100 domestic games approved in January 2020, but we have yet to see a single import game approved this year. Given the current circumstances we may not see an import game approved for some time, which will have a negative impact on the Nintendo Switch that launched with one game and was slated to have multiple titles approved and out by the end of January (and on all other foreign developers trying to get games approved via operators in China).

We expect multiple gaming firms to be impacted by the novel coronavirus, especially firms such as WYWK which are an internet café chain. The delay in game approvals and difficulty in returning to a normal working environment will especially impact smaller gaming firms who will be unable to prepare for these events. Larger gaming firms such as Tencent have already put plans in place to allow employees to work remotely, and whilst they will also be impacted from a delay to game approvals, this will be offset by increased revenue from legacy titles as mobile, console and in home PC gaming time and spend increases during this period. Gaming firms have also donated money for medical supplies and to help those impacted by the novel coronavirus.

The 2020 Taipei Game Show, scheduled to take place between February 6th-9th, was also impacted with the organisers postponing the event till Summer in order to protect the health and safety of attendees.

The Lunar New Year holiday period is always a peak time for gaming with players spending more time and money across games. The novel coronavirus has had a positive impact on home gaming across mobile, PC and console due to the extension of the Lunar New Year holiday, a lockdown of major cities and increased free time at home. There have also been negative impacts, primarily the cancellation of offline esports events and a decline in internet cafe usage. The extension of the holiday period also means that new game approvals may be delayed for some time but expect this to be offset with new content for legacy titles to keep players engaged. We will continue watching the China games market and send our heartfelt wishes for everyone in China during this time, especially Niko’s China-based staff.