Already one of the most important segments of gaming and esports, streaming has taken on even more prominence due to the coronavirus outbreak. China’s gamers have increased their gaming and streaming time, and esports events have moved from offline to online only. The China Game Streaming Tracker tracks the largest game livestreaming platforms in China including Douyu, Huya and Bilibili. We track the three APIs 24/7, and produce weekly game rankings based on 5 index categories: heat index, streaming hours, unique streamers, total tips/gifts, and fans per streamer.

To provide a snapshot what’s included in the China Game Streaming Tracker, take a look at the below example. While our Streaming Tracker includes 3 platforms with weekly rankings of hundreds of titles, this example post talks about the largest platform, Douyu (165+ million monthly active users), for the month of March. For illustrative purposes we are showing you a monthly view (not weekly) of the top 20 most popular games on the platform during March ranked by Douyu’s heat index, which is derived from an algorithm based on each game’s number of viewers, hours streamed and number of virtual gifts/tips. We provide qualitative analysis of the data as well.

Find out more about the China Games Streaming Tracker here, or contact us at research@nikopartners.com. 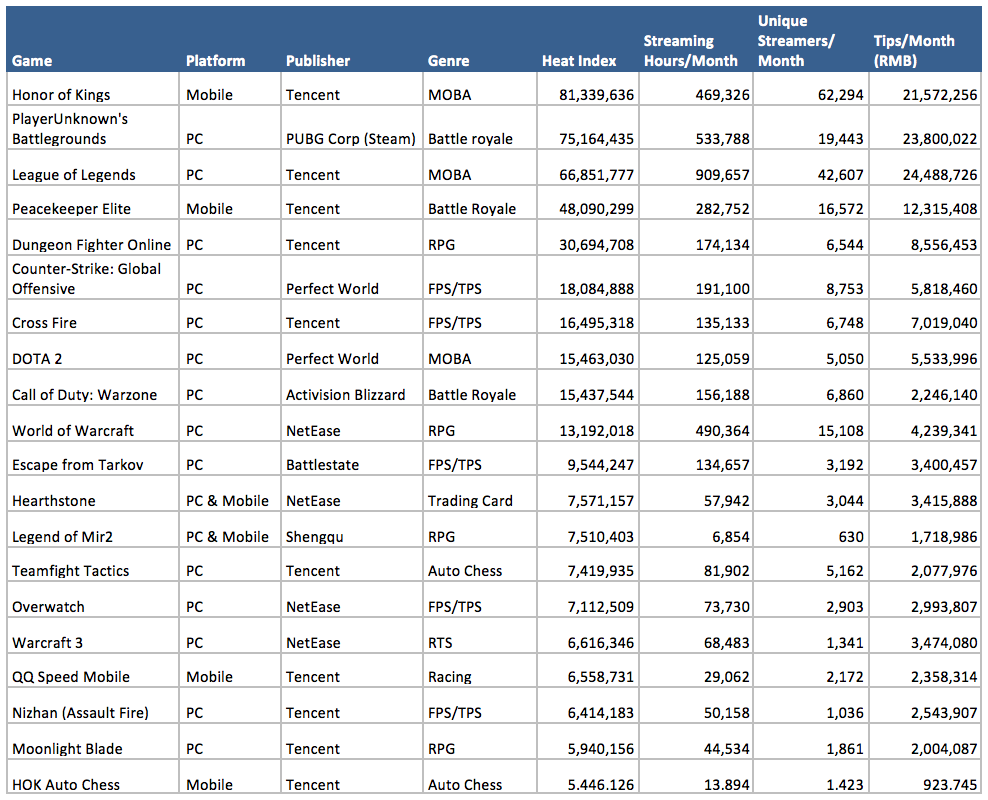 Tencent and NetEase dominate the charts

Honor of Kings is #1

MOBA games are the most popular

Despite accounting for just 7 of the top 100 games on Douyu, the MOBA category is the most popular on the platform according to Douyu’s heat index. Honor of Kings, League of Legends and DOTA 2 are the most popular MOBA titles with over 1.5 million hours streamed between them. Streamers of these games also earned over RMB 50 million from tips during the month.

Battle Royale and Shooter games are boosted by new launches

Battle Royale is the #2 most popular category on Douyu with PUBG, Peacekeeper Elite and Call of Duty: Warzone accounting for nearly 1 million hours streamed during March. PUBG is extremely popular in China, having sold over 20 million copies on Steam. The game has a similar number of unique monthly streamers compared to Peacekeeper Elite, its mobile counterpart in China, yet has nearly double the number of hours streamed and tips (despite being available only via Steam, not a domestic publisher). Call of Duty: Warzone, which launched on March 10, also is only available from a non-domestic publisher, via Blizzard Launcher, yet ranks #9 for the month on the heat index.

Shooter games are the #4 most popular genre on Douyu with Counter-Strike: GO and CrossFire leading the way. Escape from Tarkov, a FPS game with role playing and simulation elements that launched earlier this year, has become extremely popular in China despite no domestic publisher. The buy to play game costs $45 and requires a VPN/online accelerator to play via the game’s website, both of which are a barrier to some players and has led to a low number of unique monthly streamers but high number of viewers and tips which has boosted its ranking on the heat index.

Esports is a key driver for game livestreaming

Esports titles remain the most popular games on Douyu, with 15 of the top 20 titles having a competitive esports component. Douyu also courts a number of the top esports players to stream exclusively on its platform, something that is only now becoming common in the West on Twitch and Mixer. Despite the cancellation of offline esports event due to the COVID-19 pandemic, most esports tournaments and leagues have been able to switch to an online format with the LPL, KPL and PEL relaunching during March. This helped boost engagement on Douyu during the month.

RPG games account for 29 of the top 100 games on Douyu, the most of any genre, and RPG is the #3 most popular genre on the platform based on Douyu’s heat index. More than 1.1 million hours of RPG games were streamed in March and RMB 25.57 million was generated from tips. Dungeon Fighter Online (DNF), a 2D beat ‘em up RPG, ranked #5 on the March heat index. We note that DnF had less than half the number of unique monthly streamers and total hours streamed when compared to World of Warcraft, but this was offset by more popular streamers who had higher viewers and tips, such as 旭旭宝宝 (XuXuBaoBao).

PC games remain the most popular

Out of the top 100 most popular games on Douyu during March, 64 are PC games, 27 are mobile games, 5 are cross platform and 4 are console games. 3.97 million hours of PC games were streamed on Douyu during March, nearly 4x more than the 1.09 million hours of mobile games. However, the value of virtual gifts and tips for all PC games was just 2.5x higher at RMB 122 million, and RMB 49.5 million for all streams of mobile games. In total, streamers of the top 100 games received over RMB 183 million in tips in March.

You can learn more about the China Games Streaming Tracker here, or contact us at research@nikopartners.com.

The methodology includes our calculated daily average rankings of categories on the websites, plus our calculation of streaming hours, which is a category that the sites do not provide directly. We also total the number of fans per unique streamer.The data available on the websites changes constantly, and it is only with Niko’s algorithms and calculations of the raw data that we can see the daily and weekly rankings to make the index data meaningful when analyzing games, streamers and publishers.