A notable trend in China’s digital games market is successful PC to mobile game adaptations. What we have seen is that hardcore PC-based MMORPGs, for the most part, have been relaunched as mobile games, and this is a trend that is relevant in 2017. Most of the Top 10 grossing mobile games on the iOS chart are mobile versions of PC games. However, mobile games based on new IP are also quite important, as evidenced by the success of Onmyoji in Q4 2016.

Perhaps the most popular example of a successful PC to mobile game is Fantasy Westward Journey.  Fantasy Westward Journey, an MMORPG developed by NetEase, first launched in 2004 for PC. The game became a hit and by 2007 had over 1.5 million peak concurrent users. In 2015, the game was launched as a mobile game, while still retaining the hardcore gameplay, and within two hours it was the #1 game based on downloads according to NetEase. It took the mobile game merely one week to achieve the 1.5 million peak concurrent user mark, something the PC game had taken three years to achieve. Since then, NetEase has seen significant growth from both the mobile and PC version with company revenues increasing from $1.6 billion USD in 2014 to $4.0 billion USD in 2016.

The use of existing PC-game IP has several key advantages for building mobile games. The obvious one is that the PC game is already known and played by many. Even those who don’t play them are aware of the IP. Mobile games that use existing PC-game IP tend to boost the lifespan of both versions. Fantasy Westward Journey PC, for example, remains the third most popular PC game in China in 2017, 16 years after launch. The mobile version is the third highest grossing mobile game on iOS in China, two years after launch. NetEase has kept both games fresh with new content, expansion packs and even interoperability between the two versions. In addition, NetEase and others also have reported that mobile games based on PC-game IP usually monetise better than those based on new IP.

This trend hasn’t gone unnoticed by other game operators in China. Since the release of Fantasy Westward Journey, nine of the top 10 PC games have launched or plan to launch a mobile version. In fact, there were six such games in the top 10 iOS games chart for 2016. I wouldn’t be surprised if that number was to increase in 2017 based on the current pipeline of games due to release. 2016 already saw the release of Crossfire, New Ghost, Demon Seal, Fantasy Zhu Xian, Asktao, JX Mobile and many more for mobile devices. 2017 will see DNF, JX Online 3, TLBB and Blade & Soul come to mobile too. 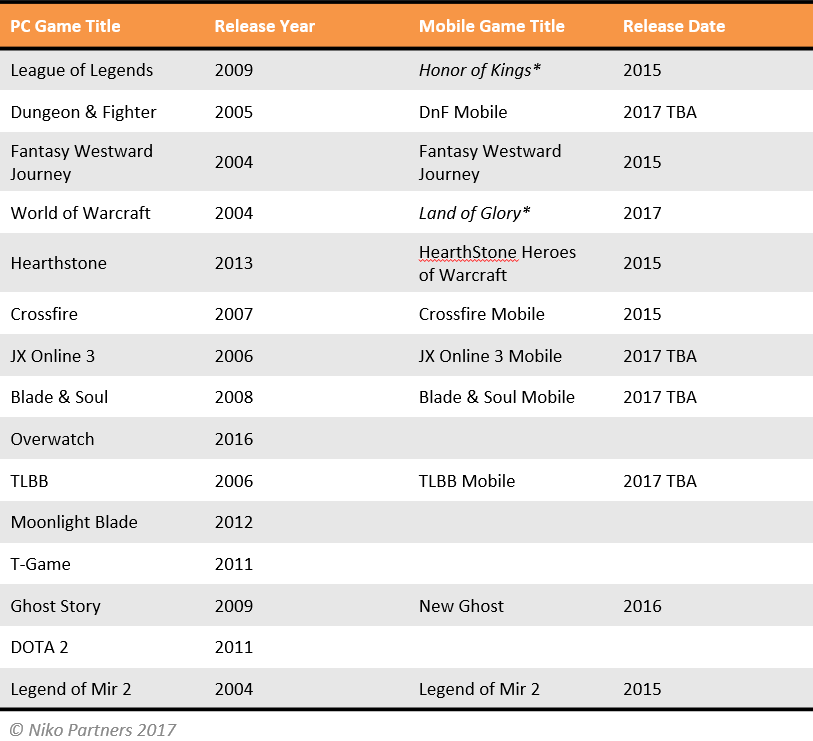 Source: 17173, Niko Partners Games Database
*Not an official mobile version. This is a mobile game that is extremely similar to the PC game listed and is published by the same company.

It’s the publishers with popular PC IP that are benefiting from this trend. However, publishers that can bring popular overseas IP to China can also benefit. Tencent has worked with South Korean publishers to bring Dragon Nest, Lineage II and DnF to mobile, all three of which are extremely popular on PC. NetEase has bought over Minecraft and World of Tanks: Blitz to smartphones. There is even a Final Fantasy game for mobile that is published by Perfect World that aims to capitalize on the success of Final Fantasy 14 in China.

One other thing we’ve noticed is that mobile games based on PC–game IP can be successful even if they’re not the exact same game. Honor of Kings, the most popular mobile game in China, is a good example of this. The game, published by Tencent, is very similar to PC game League of Legends and many even call it the mobile version of League of Legends. It begs the question of why Tencent didn’t just bring League of Legends to mobile, given that they own Riot Games, but Honor of Kings has done the job well enough. NetEase, who publishes World of Warcraft (WoW) in China, has just launched the beta for Land of Glory. Whilst Land of Glory is not World of Warcraft, the game itself is extremely similar to WoW and many press outlets and reviewers have already pointed out that this is effectively a mobile version of World of Warcraft. The future success of that game on mobile devices will be one to watch, given the popularity of World of Warcraft on PC in China.

Chinese publishers have seen how bringing a popular PC franchise to mobile has led to increased engagement and spend on both versions of the game. However, there is only a finite number of AAA PC games that can be bought to mobile and most of the top 10 already have a mobile version. Mobile games based on PC-game IP is a good earnings generator in the short term but long term growth is going to come through expanding already existing IP and investing in new IP.