The second batch of import games approved for release in 2020

China’s game regulator, the National Press and Publication Administration (NPPA) has published a second batch of import game licenses on August 6, 2020. This is welcome news for the games industry as the last batch to be approved was in March 2020 and the one prior to that was in November 2019. This batch includes 28 titles, of which there are 3 PC games, 23 mobile games and 1 console game. There is also one multi-platform title that has received a license both for PC and mobile. The full list of games approved on August 6 is included below and we publish new games as they are approved, along with other data, in Niko’s China Games Market Database. 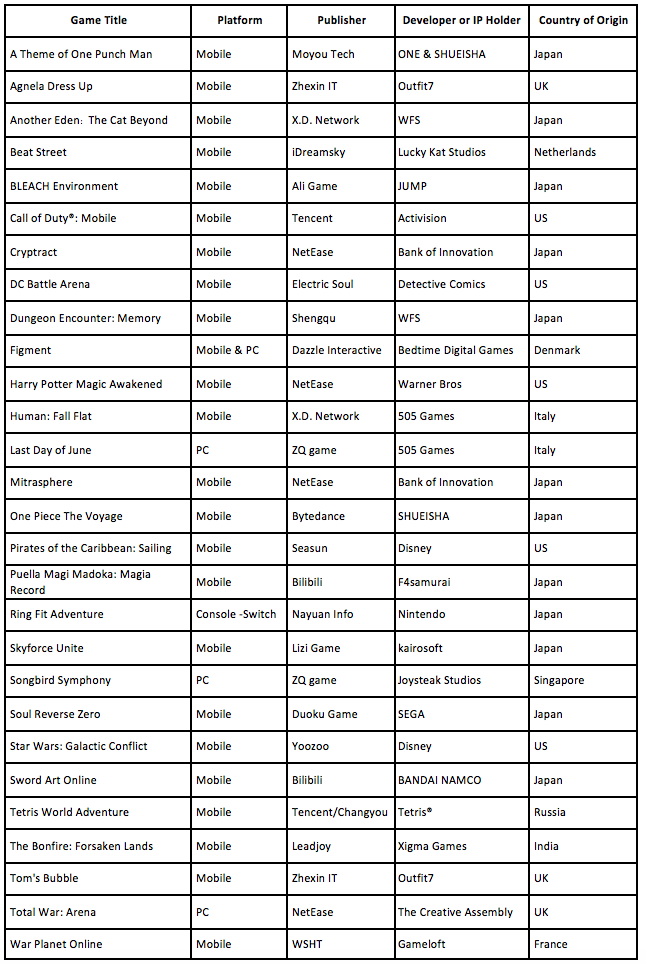 43% of games approved were developed by Japanese companies

Japan remains the leading country for import games in this batch with 12 (43%) of the 28 new ISBNs granted to Japanese game developers. Niko’s February 2020 report stated that Japan is the leading market for import game approvals in China, accounting for approximately 1/3rd of import game approvals in 2019. We also released a report What’s behind Japan’s #1 share in China’s games market that looks at how Japanese games have been able to succeed in China and vice versa.

Notably, the August 6th list is the first time that new games from the US have been approved since October 2019. It remains unclear whether US game approvals have been impacted due to the ongoing tensions between the two countries, yet no other import games had been approved since March 2020 either. The 5 new games from the US include titles from Disney, Activision and Warner Bros.

Mobile games accounted for more than 80% of all titles approved in this batch, and have made up the bulk of approvals in the past few years. One notable title is Call of Duty: Mobile, from Activision. The game is developed by Tencent’s TiMi studio and published by Activision in North America. Tencent will publish the game in China. According to Sensor Tower the game has surpassed 250 million downloads worldwide and has grossed nearly $350 million. Tencent has previously worked with Activision on Call of Duty: Online, a free to play PC game designed for the China market. The game is on its way to becoming a top mobile esport after Activision launched the Call of Duty: Mobile World Championship this April. We believe that the game can become a top Esport in China where there are over 350 million esports fans as per our recently published report: Esports in Asia.

Harry Potter: Magic Awakened is another key title that was approved in this batch. The mobile RPG game with strategy and card elements is co-developed by NetEase and Portkey games with the IP licensed by Warner Bros. The Harry Potter IP is popular in China and we expect the game to perform well. The first Harry Potter movie was also re-released across Chinese cinemas recently after they began to re-open across the country, solidifying its place as a classic movie franchise in China.

One Piece: The Voyage was also approved, which is developed by CMGE and licensed from SHUEISHA. The mobile RPG game based on the Japanese IP will be published by Bytedance in China, as the company looks to expand its presence in the games market.

One Notable title approved for PC is Total War: Arena, a multiplayer strategy game with MOBA elements developed by Creative Assembly, and will be published by NetEase. Notably, Total War: Arena was released outside China in 2018 but was shut down after one year due to poor performance. NetEase is reviving the free to play PC game series in hopes of finding an audience in China. The series had a boost by launching Total War: Three Kingdoms – however it was only launched on international Steam, not licensed in China. Chinese gamers accessed that game on Steam and now NetEase is officially launching Total War: Arena in China.

Figment, an action adventure puzzle game from Danish studio Bedtime Digital Games, was also approved with a license for PC and Mobile. If a game is identical on both platforms, one ISBN is sufficient.

The NPPA has begun to crack down on non-compliant games this year, starting with unlicensed games that are operating on app stores in China. A law introduced in 2016 stated that all video games must obtain an ISBN (license number) before they can be distributed and monetized in mainland China. While Android stores have been compliant since 2016, loopholes have existed that have allowed unlicensed games to launch and operate on Apple’s iOS app store since.

Niko notified clients that Apple would begin to require ISBNs by June 30, with the deadline recently extended to July 31. We note that 19,914 unlicensed games were removed between July 1 and July 31, with a further 26,815 games removed on August 1, after the final deadline. We expect any remaining unlicensed titles to be removed by the end of December 2020.

It is now more important than ever to ensure paid games and games with in app purchases are compliant and have relevant licenses before launching in China. To help developers enter China, we publish a report titled Gaming regulations and the approval process for launching a game in China which details the content requirements, submission process and other steps for launching a game in China.

Note: Hyper-casual and casual games that monetize solely through ads (no IAP) are not required to get an ISBN prior to launch, nor are educational games that are listed in a non-game category on app stores.

We offer several services to our clients to keep them informed on industry developments as they happen, including our Value-Added News Analysis Service, a curated news service that provides critical news information, customized to your strategic areas of interest, along with our analysis on why it’s important.

You can also subscribe to our free weekly email Niko News which gives you the most important games, esports, and streaming news from across Asia.